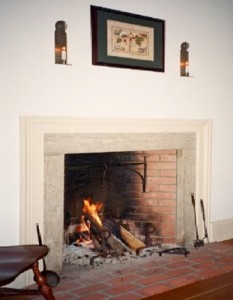 Rumford fireplaces are tall and shallow to reflect more heat, and they have streamlined throats to eliminate turbulence and carry away the smoke with little loss of heated room air.

Rumford fireplaces werecommon from 1796, when Count Rumford first wrote about them, until about 1850. Jefferson had them built at Monticello, and Thoreau listed them among the modern conveniences that everyone took for granted. There are still many original Rumford fireplaces – often buried behind newer renovations-throughout the country.

Count Rumford, for whom the fireplace is named,was born Benjamin Thompson in Woburn, Massachusetts in 1753 and, because he was a loyalist, he left (abruptly) with the British in 1776. He spent much of his life as an employee of the Bavarian government where he received his title, “Count of the Holy Roman Empire.” Rumford is known primarily for the work he did on the nature of heat.

Back in England, Rumford applied his knowledge of heat to the improvement of fireplaces. He made them smaller and shallower with widely angled covings so they would radiate better. And he streamlined the throat, or in his words “rounded off the breast” so as to “remove those local hindrances which forcibly prevent the smoke from following its natural tendency to go up the chimney…”

Rumford wrote two papers detailing his improvements on fireplaces in 1796 and in1798.* He was well known and widely read in his lifetime and almost immediately in the 1790s his “Rumford fireplace” became state-of-the-art worldwide. 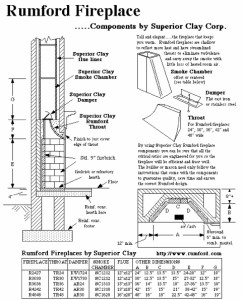